By the end of April the public petition against cuts to local pharmacy services had reached one million signatures. Have you signed up to support your local pharmacy yet?

The Department of Health has indicated it believes that there are up to 3,000 too many pharmacies in England. At the same time, it has proposed a series of measures which would divert investment from local pharmacies to other care settings or to online suppliers of medicines. 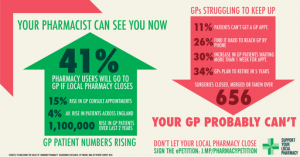 The current direction of policy, if not challenged, will lead to a serious fracturing of the pharmacy network, say pharmacy organisations. They believe the Government is conducting a dangerous experiment which will reduce people’s access to medicines and healthcare advice, as well as putting extra pressure on GPs and hospitals.

It seems many people agree. The Support Your Local Pharmacy campaign is set to be the largest petition circulating in the UK. Ask you pharmacist if you want to learn more.

An online petition requiring Parliament to consider this issue for debate has also been launched. 100,000 signatories are required. This petition can be signed here:

More information about the Support Your Local Pharmacies Campaign can be found here:

A new hope for arthritis patients?

Arthritis and other inflammatory conditions could be helped by new insights into how the body’s immune response is switched off.

Scientists at the University of Edinburgh have discovered how compounds produced by the immune system help to prevent inflammation and damage to healthy tissues. The compounds – called alpha defensins – are part of the body’s first line of defence against infection. They help to stop bacteria and other infectious agents from reproducing.

The overall effect is to limit inflammation without compromising the body’s ability to fight infection. The findings could lead to new treatments for chronic inflammatory disorders including rheumatoid arthritis, which occurs when the immune system attacks the joints.